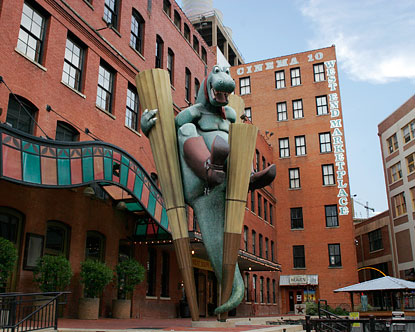 In 2006, the West End Marketplace closed, unofficially marking the demise of the West End in Downtown Dallas. The area is often forgotten by local Dallasites and synonymous with tourism. However, all of that is changing as office buildings trade hands, new restaurants open and co-working spaces/start up incubators and creative companies flock to the West End.

Other than the East side of Downtown, the West End is the place where office users can find “creative” space in converted warehouses. These opportunities are few and far between elsewhere in the city. Currently, we are seeing all types of industries in the market for creative space–exposed brick and ductwork, original wood floors, character. What used to be prime space for agencies and other creative users has now sparked interest from more traditional industries such as law and finance.

In addition to buildings under new ownership, Ellen’s Southern Kitchen and Tutta’s Pizza have both opened in Market Ross Place giving people new dining options. Also, the 555 Ross Avenue apartments are now open and available for lease. Although this construction decreased the number of parking spaces in the area, more people living in the area should help with new retail and overall, be great for the neighborhood.